We’re going to bet on the fact that, until now, you didn’t even know that shrimp and prawns were different animals and that, just like us, you’d been using their names interchangeably all your life thinking that prawn was maybe just a fancier term for shrimp.

Although it’s quite difficult to distinguish a prawn from a shrimp by just tasting them, they are, in fact, two different animals that just happen to look very similar.

The most important difference between shrimp and prawns is that prawns are freshwater dwellers while shrimp are only found at sea in saltwater. Asides from rivers, prawns will also live in what is known as brackish water or water that is a mixture of fresh water and salt water which can be found in lagoons and estuaries.

Regarding their looks, there are small differences between the two that can help you identify them. First of all prawns are larger than shrimp but if you’re not doing a comparison with both items present, we have a list of things you can look at to figure it out:

Claws – This is the easiest way to distinguish a shrimp from a prawn as it only requires a quick look. Both shrimp and prawns sport claw-like structures in their front legs but prawns will have three pairs of clawed legs while shrimp only have two.Shells – Shrimp and prawns have segmented shells to help them move. The first of these segments is the one that’s right behind the head. Starting with this one, count three segments. If the second segment is overlapping the first and third ones, then you’re looking at at a shrimp. If they continue in a regular pattern, then you have a prawn.Bend – That overlapping segment that we just talked about creates a more distinct bend in shrimp than the one found in prawns. This means that shrimp will have a more pronounced u-shape and that prawns will exhibit a flatter curve.

Using the words prawn and shrimp also varies from one country to another. Americans almost always use the term “shrimp” to refer to anything that looks shrimp-like but will sometimes use the word “prawn” to describe larger shrimp. Since word “prawn” originated in Britain, you will find that it is  much more commonly used in Europe and in countries that are culturally associated with the U.K. such as Ireland, New Zealand and Australia. 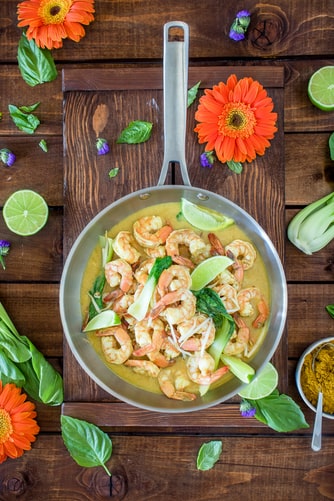 Although prawns and shrimps are two different animals, their flavor profiles are nearly identical and so they are interchangeable ingredients in the kitchen. The same goes for their nutritional value: they’re both excellent sources of low-fat protein, B-12 vitamin, phosphorous and selenium.

For those with more developed palates, however, the difference may be palpable, though not a deal breaker. Many claim that prawns tend to be sweeter than shrimp because they live in freshwater and consume a different diet.

Knowing how to differentiate each species from one another can be useful and even fun but we recommend you focus on an even more important matter: where was the product sourced from? Regulations for both food and human safety in the shrimp and prawn industries are notoriously lax, especially in countries such as India or Thailand. This is why choosing shrimp or prawns that are sustainably sourced and wild caught will give you better results, a superior experience and be safer for you and the planet.

Check out these recipes where you can use either shrimp or prawns:

How to Make Your Coconut Shrimp Recipe More Appealing

Benihana Garlic Butter: How To Make It